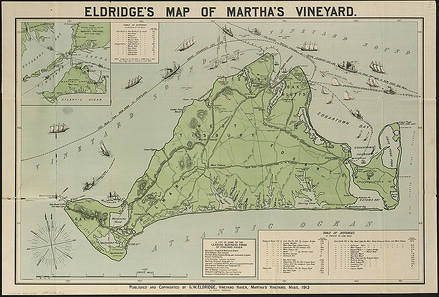 Martha's Vineyard is a 100-square-mile island located three miles off the coast of Cape Cod. Its topography, in fact its very existence, results from its location at the southern extremity, or terminal moraine, of the part of North America covered by ice during the last Ice Age, more than 10,000 years ago. Home to the Wampanoag Tribe, the islands were settled by Europeans in the mid-17th century.

Today, year-round residents, seasonal residents—many of whom own second homes—and hundreds of thousands of short-term visitors live on or come to the Island, attracted by the unique natural, ecological, historical, cultural and scientific values that define the beauty and character of Martha's Vineyard.

Three-quarters of the Island's population is concentrated in the three "Down-Island" towns: Tisbury, Oak Bluffs and Edgartown, each with a busy commercial town center. Vineyard Haven in Tisbury serves as the Island's main port, seconded by Oak Bluffs in the summertime. The three "Up-Island" towns, West Tisbury, Chilmark and Aquinnah (formerly called Gay Head) are more rural in character. Each of the Island's towns reflects its origins: Edgartown as the home of master seamen and the seat of County government; Tisbury as the Island's gateway and market town, West Tisbury and Chilmark as agricultural villages, Aquinnah (Gay Head) as the Wampanoag tribal settlement and a fishing village, and Oak Bluffs as the first summer resort.

Natural Environment and Land Use: Martha's Vineyard shares common natural features with other coastal healthlands but is much less developed than other areas along Vineyard and Long Island sounds. Many threatened and endangered species exist among the seasonal throngs of visitors. The Vineyard went through its biggest development surge in the 1980s, yet only about one-third of the Island is currently developed. Through the combined efforts of a variety of nonprofit conservation groups, the Manuel Correllus State Forest and the voter initiated Land Bank Commission, more than 40% of the Island is conserved from development. While the commercial activity is still focused in and around the traditional town and village centers, residential development is more dispersed, especially up-Island where minimum lot sizes are 2 and 3 acres.

Transportation: Since Martha's Vineyard is an island, the only access is via ferries, planes and personal craft. The roads are almost all two lanes wide, with no posted speeds over 45 mph, and with no traffic lights. Although has a relatively low density, Martha's Vineyard has one of just three year round public transit systems in the Commonwealth. The rural character of the roads is a big attraction.

Population: The population of the Vineyard remained relatively stable for the first half of the 20th century with a population growing from 4,397 in 1900 to 5,763 in 1960. The population began to grow dramatically in the 1970's and doubled in the last quarter of the 20th century. From 1970 to 1990 the year-round population of Martha's Vineyard increased by over 30% each decade, and has grown to 17,041 (2012). As a resort area, the population changes dramatically from one season to the next, increasing more than threefold in the summer with seasonal residents who have second homes here as well visitors who come for the season, a month, a week or perhaps only a day.

Economy and Employment: The cornerstone of the Island's economy is providing services to seasonal residents and visitors. The service, retail trade, construction, and finance, insurance and real estate sectors—mainly seasonal industries—account for 54% of Island jobs. A large majority of the businesses on the Island employ four or fewer workers each. The tourism and service industry is highly image-conscious, seasonal and labor intensive.

Housing: There are 17,188 housing units on Martha's Vineyard (2010), the vast majority single-family homes. Only 43% are occupied year-round; the remainder are either occupied seasonally or vacant.