Sea-Level Rise in the Past 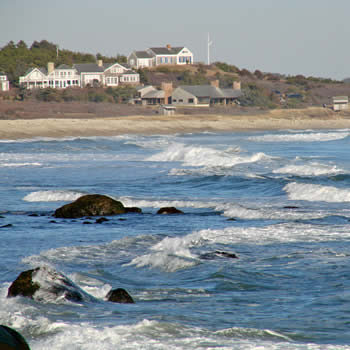 Sea level has been rising in our area since the retreat of continental glaciation some 20,000 years ago when the mile-thick ice mass, which also formed the hills and plains of Martha’s Vineyard, melted. In the past century, the dramatic escalation in air and water temperature due to climate change has brought about greatly accelerated sea level rise. The average worldwide sea level has risen about 8 inches since 1880. Historic sea level monitoring data from Woods Hole since 1932 indicates sea-level rise of 2.8 mm per year and from Nantucket since 1965 indicates a rise of 3.5 mm per year (65% and 76% respectively more than the world-wide trend).

Projecting the Amount of Sea-Level Rise on Martha's Vineyard

Sea-level rise on Martha's Vineyard is projected to be very significant and will impact our critical infrastructure, roads, buildings, and wetlands. Worldwide sea level rise is expected to not only continue but to accelerate because of:

According to the IPCC, the average sea level is projected to rise between 12 and 48 inches by 2050 and 12 and 72 inches by 2100. To this worldwide rise is the relative impact of subsidence in those parts of the world, such as Martha’s Vineyard, which are cooler and are sinking deeper into the Earth’s crust. Some scientists, such as oceanographer and climatologist Stefan Rahmstorf, argue that even these estimates are low because they don’t sufficiently account for the increase in water temperature and the resulting expansion of the ocean.

The Need for a Multi-Factor Dynamic Model: A so-called “bathtub model” gives a rough portrait of potential impacts assuming a simple rise in sea level with all other factors remaining the same. Although the bathtub model gives a good first approximation of possible impacts, it would be desirable in the future to use a sophisticated multi-factor model to better predict the likely impacts. Such a hybrid model would combine the impacts of sea-level rise with the other factors causing coastal erosion, as well as the shape and geology of the affected land areas. The result would provide a plausible estimation of the lateral position of the shoreline after erosion and sea level rise. To adequately address vulnerability, the impacts of coastal flooding (as from a Nor’easter) and storm surge (from a hurricane) should also be modeled. That result would identify vulnerability under storm conditions, a more realistic estimation of the likelihood of inundation under less than ideal conditions. The Woods Hole Group developed a model dealing with most of these factors, and has been hired by the Town of Oak Bluffs to do more sophisticated projections of sea-level rise in Oak Bluffs. It would be desirable to complete similar modelling for the whole Island in the next few years.

Sea-level rise will impact a number of resources.